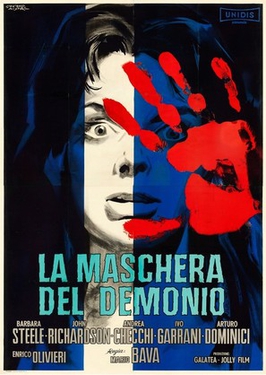 We begin our chat with how Andre got into the genre and which films inspired her to delve more deeply into it. Among the films we discuss are Jaws, Suspiria, Hellraiser 2 and Killer Klowns from Outer Space. We talk about how horror films, despite their penchant for blood and guts, can actually be quite beautiful too. We also chat about where horror is going and discuss future classics such as Goodnight Mommy and The Babadook.

Since she’s a fan of Italian horror, we decided to chat about one of our faves, Mario Bava’s immortal classic, Black Sunday.

A witch/vampire hybrid, Black Sunday (La maschera del demonio; also known as The Mask of Satan and Revenge of the Vampire) is a 1960 B&W Italian Gothic horror. Based very, very loosely on Gogol’s short Viy (only a witch and the characters’ penchant for vodka survive) Black Sunday follows two doctors on route to a medical conference in Europe who get sidetracked by a…dark and dusty cobwebbed crypt! It happens to be the final (not quite) resting place of lovely witch Asa (the  gorgeous Barbara Steele) and her paramour, both burned at the stake and tortured by Inquisitors.

The film, very gory for its time, helped launch the careers of director Bava as well as beauty Barbara Steele, who went on to star in the Poe adaptation, The Pit and the Pendulum as well as Nightmare Castle and Cronenberg’s Shivers.