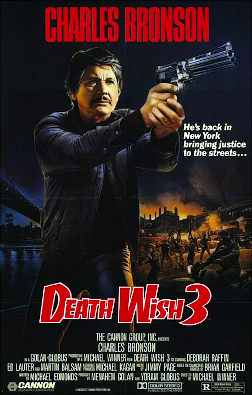 Mental Cannon treatment of a series past its best before date. The first Death Wish is a stone-cold uber classic. By the time Golan and Globus got around to it though, things were really coming off the rails.

Death Wish 3 was written under a pseudonym (understandably) and is the last collaboration between star Charles Bronson and director Michael Winner.

To reduce costs, this turd was filmed predominantly in London rather than The Big Apple.

The film carries out the vigilante justice/high body count motif we’ve come to expect from the series, yet ups the ante considerably. A whopping 83 characters had to be fitted for coffins in this one!. Here, Paul Kersey (Sir Charles) returns to Brooklyn to find his army buddy has been attacked and left for dead.

Paul moves in to his deceased friend’s apartment complex in East New York and begins to lay waste to an assortment of mostly interchangeable goons, in this, the most insane of all the Death Wishes.

Tune in as we chat about…DEATH WISH 3