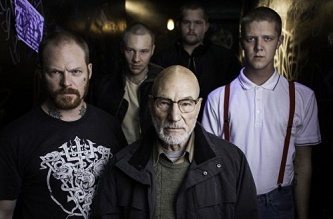 A punk band gets offered a seemingly lucrative gig, after tanking it at a crappy restaurant in front of indifferent dozens. But the band in GREEN ROOM ( the Ain’t Rights) doesn’t know what’s comin’ to them, as they answer the bell to open for Cowcatcher, a band that has a sizable neo-Nazi following. What could go wrong?

Find out, and tune in to the podcast.

But first, try and watch Green Room. It’s probably one of the better horror films released in the last few years, featuring an excellent performance by Patrick Stewart as an evil goon, as well as the late Anton Yelshin, whose talents will be greatly missed.

Director Jeremy Saulnier is one to watch. We know this because of his superlative efforts, Murder Party and Blue Ruin.