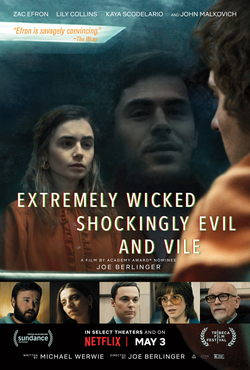 What a mouthful of a title. But unlike other depraved lunatics, for some reason Lady Killer and The Campus Killer never stuck with Terrible Ted the way that similar monikers have to BTK, The Green River Killer, Jack the Ripper, etc.

Any way you slice it (not a pun as that was not his MO) this falls into the sub genre of horror known as “serial killer drama”, into watch falls the likes of David Fincher’s Zodiac, Doctor Sleep, Se7en, and a few dozen others. And that’s excluding fictional serial killers or movies inspired by them (Psycho, for example).

So, what’s this one all about? It stays true to conventional storytelling/narrative, and has a few eyebrow raising scenes, as well as eyebrow raisers in the credits (Jim Parsons of The Big Bang Theory as a prosecuting attorney? James Hetfield from Metallica as a cop?).

On this episode of the Podcast, Ted Bundy, actors taking on challenging roles or going against type, David Fincher, the police and how they handled this case, the Bundy MO, and then at the end, a brief discussion about the Top 25 Horror Movies of All Time and where Henry: Portrait of a Serial Killer, would fit on that list.

Tune in folks, and don’t forget…Holiday shopping season is here. We have authored two books together, including Death by Umbrella! The 100 Weirdest Horror Movie Weapons but also Mine’s Bigger Than Yours: the 100 Wackiest Action Movies. The latter is coming to stores in November, and the former is available through Amazon. Pick ’em up and support the show!