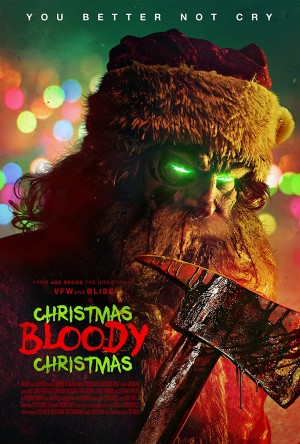 The holiday season is upon us. And as fans of the Killer Santa genre, we decided to dive into Christmas Bloody Christmas, a Shudder production that is streaming right now.

The plot: the subject of a nationwide recall, an animatronic Santa goes haywire. And of course, this killer Kris Kringle begins to lay waste to townsfolk.

On this episode, there’s a discussion of:

Don’t forget to tune in and subscribe to the Really Awful Movies Podcast. And don’t forget, we are the authors of two acclaimed nonfiction genre film books, Death by Umbrella! The 100 Weirdest Horror Movie Weapons (foreword: Lloyd Kaufman from Troma) and Mine’s Bigger Than Yours! The 100 Wackiest Action Movies (foreword: Brian Trenchard-Smith, Stunt Rock, Strike of the Panther).

Put either title under the tree, and we’ll be in your debt.