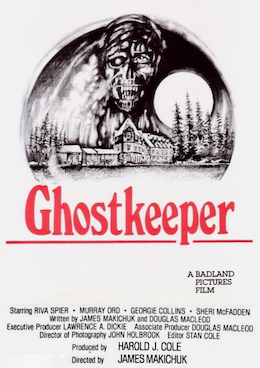 On this week’s episode of the podcast, CRAP OF THE WEEK! This is a recurring segment, a review of things one-half of the Really Awful Movies team has seen recently.

On today’s show, Ghostkeeper, Rituals, Imposters and Bride of Re-Animator.

Ghostkeeper is an 80s Canadian / Canuxploitation tax shelter movie based on the Wendigo legend. It’s about a group of snowmobilers who find themselves stranded in a sprawling, mountain lodge not unlike the Overlook Hotel in The Shining. Directed by James Makichuk, the creative force behind the awesome Hamilton and Toronto-lensed green energy (!) horror The Tower,  Ghostkeeper has…a surfeit of the white stuff. This is one, snowy-ass movie.

Canadian horror completists need to check it out.

Also, Rituals. An oft-discussed film on the Really Awful Movies Podcast, this Hal Holbrook starrer is about bickering docs on a campaign trip in Northern Ontario. Go see it, it’s awesome. It’s tense and well written and a total Bechdel Test failure.

On this episode, we deviate slightly and tackle a TV series on Netflix called Imposters. It’s about a trio of people who find one another after being swindled by the same woman, a femme fatale-type named Maddy (who has various aliases, natch). They eventually become embroiled in the scam-artist lifestyle themselves.

Lastly, a revisiting of Bride of Re-Animator, an Amazon Prime watch which sees Dr. Herbert West back to his body-robbing shenanigans. 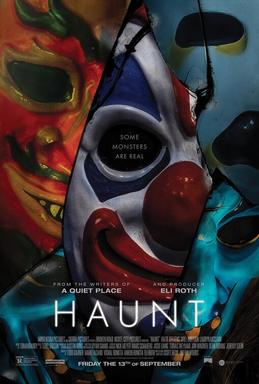 Haunt is a 2019 American slasher film written and directed by Scott Beck and Bryan Woods, the writing duo behind A Quiet Place.

It’s set in one of those haunted house Halloween attractions. And surprisingly, this is one of the better films set on Halloween, along with John Carpenter’s Halloween, House of 1,000 Corpses, Sinister, and Murder Party, which we podcasted not long ago.

The premise: a bunch of college co-eds are out and about in small town Illinois, a bit like the Michael Myers classic. They’re bar-hopping, and after growing weary of it, hop in their vehicle in search of one of those spooky haunted houses.

They drive up to what is not so much a house, but more of a haunted warehouse. And the doorman is a creepy clown, holding out two hands to choose their own adventure inside, in a way.

The performances are dynamite too, and there’s some nice backstory for the lead.