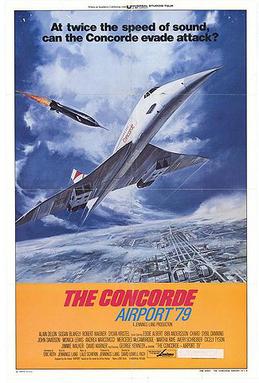 On this episode of the podcast, we break the sound and patience barrier with the infamously corny 70s disaster movie, The Concorde or Airport ’79 or Airport ’80 (whatever, it goes by various names).

The Airport series originated the 70s disaster movie phenomenon. This piece of junk very nearly grounded it as soon as it began. The airport series once showcased the likes of A-listers Dean Martin, Burt Lancaster and Jacqueline Bisset, but by the time the sequel The Concorde Airport 79 took to the skies, those roles went to B-movie legend Sybil Danning (Chained Heat) and Good Times ham and originator of the catchphrase Dy-no-mite!, Jimmie Walker. And let’s not forget Charo!

In The Concorde, a corrupt aerospace executive (Robert Wagner) learns that a reporter has found out about his arms dealing side-gig. Instead of muscling her, offering a bribe or killing her, he decides to blow up a concorde jet she happens to be travelling on. You gotta admire his ambition!

The captain is played by Antonioni standout and French legend Alain Delon, who needs subtitles in this one as his English is so mangled (and his subtitles would need subtitles, just to be sure). It’s his job, along with bombastic flyboy/flyman Patroni (George Kennedy, Cool Hand Luke and 200 other films) to protect passengers from missile attacks.

There are terrible effects, a who’s who of past-their-salad-days nobodies, running airplane bathroom gags that have to be seen to be believed and an itinerant jazz musician who noodles from his seat. You can clearly see how it inspired Airplane!

Variety called it an “unintentional comedy” and the film, after numerous critical skewerings, barely made back its production costs . Roger Ebert went off on the film in I Hated, Hated, Hated This Movie.