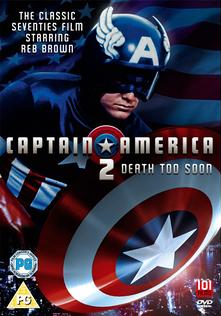 No, not The Winter Soldier. The other Captain America 2!

There’s a sinister plot against the United States. And it’s being perpetrated by a guy named Miguel (Christopher Lee). It involves manipulative gerontology – administering drugs to prematurely age the populace unless the evil guy gets his way.

Luckily, Captain America is there to fight against this nefarious force and stand up for all that is good. Unfortunately, this ain’t so good at all.

Currently sitting at 1-star on Rotten Tomatoes, after this laughable debacle of a sequel someone had the idea to recreate the magic of a Lee / Brown pairing by casting them both in the also equally bone-headed Howling 2.

Celebrate Rebruary with us with Captain America 2: Death too soon.