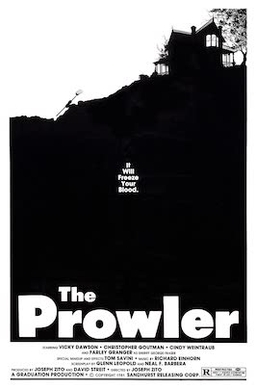 In this episode, a look at the Joseph Zito 1981 slasher flick, The Prowler.

The Prowler (released internationally as Rosemary’s Killer) is set in a very Podunk Northeastern town and is about a group of college students holding their first dance in decades because festivities had been banned due to a double murder. Seems like a bit of an overreaction, but there you go.

All of a sudden, they are being picked off one by one by a creepy masked assailant wearing military garb from World War II.

Maybe the ban was a good idea! Down with dances. This is the Footloose of 80s slasher films apparently.

We delve into the background of the film and its genuinely neat effects, courtesy of a young Tom Savini.