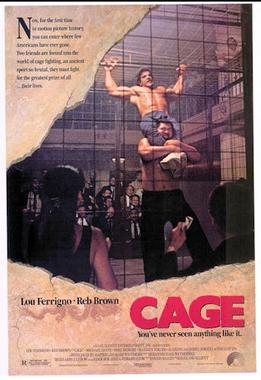 Lou Ferrigno AND Reb Brown. This is basically B-movie heaven for us on the Really Awful Movies Podcast.

In CAGE, the two muscled legends are soldiers in ‘Nam, and Billy (the go-to name for someone who is a bit slow-witted) is wounded by shrapnel. This causes him brain damage. The sergeant whose life he saved, Scotty (Brown) later helps him recuperate and basically becomes his caregiver.

Now that we’ve explained away deaf Lou’s speech as the result of a brain injury, we can get on with the lunkheaded UFC-style cage-fighting subplot.

Two low level mafiosi are in debt to some goons and they figure the giant Billy, whose muscles have muscles (and then have more muscles) would make for a great cage fighter. So they kidnap him. And put him in a tournament run by Chinese gangsters. And Scotty has to find him before it’s too late.

Racist, offensive, stupid, and yet fun-filled (just the way we like ’em) we delve into the little known (and for good reason) CAGE.