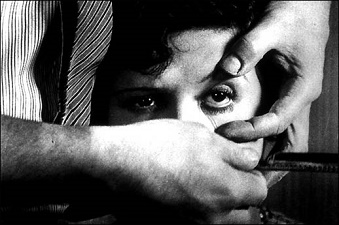 On this week’s episode of the podcast, Un Chien Andalou. You’ve probably seen the poster, even if you don’t recognize its origins.

The flick was Buñuel’s first film and was initially released in 1929 with a limited showing at Studio des Ursulines in Paris, but became popular and ran for many months later.

The chronology of the film is um, rather…episodic. It’s rather disjointed, jumping from the initial “once upon a time” to “eight years later” without the events or characters changing very much. It uses dream logic (somewhat of a contradiction in terms) in narrative flow that can be described in terms of then-popular Freudian free association, presenting a series of tenuously related scenes. As Roger Ebert put it, “Dreams were the nourishment of his films, and from his earliest days as a surrealist in Paris to his triumphs in his late 70s, dream logic was always likely to interrupt the realism of his films.”

Needless to say, this film uses a bunch of free association, and out of sequence chronology. It’s a real mind f*ck, as the kids would say.

Join us for some surrealism.