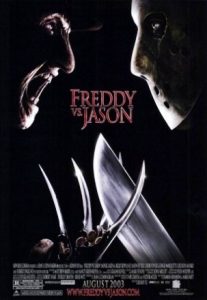 The coming together of two forces in the world of horror: Freddy vs. Jason!

The gloved one has seen his power wane. And he needs to get kids scared of their dreams again. Why not bring the fear back? But again, he cannot get his strength back. So he enlists the help of none other than Jason Voorhees, rather than hitting the gym weights or doing push-ups.

Suddenly, the body count begins to rise…and cops, residents, and figures of authority are concerned. Is ol’ Fred back? What’s going on?

Freddy vs. Jason had no business being this fun. It could’ve been a total train wreck, but is surprisingly fun.