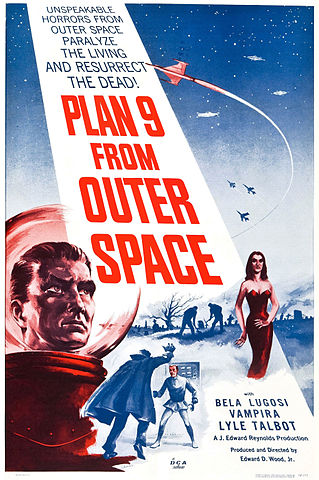 Its reputation precedes it. But does Plan 9 from Outer Space (original title Grave Robbers from Outer Space) deserve all the derogation? Some say it is the worst film ever made. This is patently false. We’d go to our graves (speaking of robbing them), saying Dana Carvey’s The Master of Disguise is worse.

Plan 9 is a 1959 independently made American black-and-white science fiction-horror film that was only released theatrically in 1959 by Distributors Corporation of America (as Valiant Pictures). The film is the product of an auteur. It was written, produced, directed, and edited by Ed Wood and stars Gregory Walcott, Mona McKinnon, legendary Scandinavian wrestler Tor Johnson, and hostess with the mostess, Vampira.

And most people know that Hollywood icon Bela Lugosi died mid-production, only to be replaced by a larger gentleman covering his visage with a cape.

The plot concerns extraterrestrials who are seeking to stop humanity from creating a doomsday weapon that could destroy the universe. The aliens implement “Plan 9”, a scheme to resurrect the Earth’s dead, referred to in the movie as “ghouls”. By causing bedlam, the aliens hope the crisis will force humanity to listen to them. If not, the aliens will then destroy mankind with armies of zombies. Or something. It’s a tad confusing.

And there are continuity errors aplenty. Viewers will have a blast noting day for night issues, the number of times the narrator says “my friends,” and of course, the infamous string allowing the flying saucers to…not so much fly, as hover in the frame.