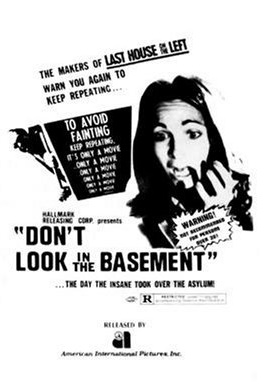 Don’t Look in the Basement, aka, The Forgotten, is a 1973 independent horror, shot on a shoe-string budget.

The film is set on the secluded grounds of Stephens Sanitarium, an insane asylum that’s considerably understaffed.

Its chief psychiatrist (Dr. Stephens) employs treatment methods which are not altogether useful.

One of the patients (known as “Judge”) hacks the good doc with an axe when they’re out in the wilderness chopping wood (one of the odd therapeutic techniques).

That’s when Nurse Beale arrives on the scene, a staffer hired by Dr. Stephens. She’s made aware that doc is stone dead, and it’s her interactions with the various patients at the facility that drives this pretty much plot-less film.

So, what to make of Don’t Look in the Basement? Because this is a 1973 horror movie, you get lots of Freudian weirdness, and the exploitation dial is ratcheted up.

On this episode of the Really Awful Movies Podcast, your genial hosts Chris and Jeff explore:

-why so many Ramones songs are about the psychiatric profession

-life expectancy and what’s a good age to conk out

-the prevalence of axe murderers in horror movies, when it’s not exactly the most easily-wielded weapon (you know, it’s heavy, and blows aren’t often fatal).

-the grotesque practice of lobotomies

-the promise of, and the of late lackluster offerings, by director M. Night Shyamalan

A reminder: episodes of the Really Awful Movies Podcast are uploaded every Friday for your listening enjoyment, and we delve into genre films of all stripes, including vetsploitation, kung fu, horror movies, post-apocalyptic wasteland films, run-of-the-mill musicals, robot monster movies, Italian cannibal fare, you name it.

And of course, if you’d like to have us chat about a particular genre film, don’t hesitate to contact us. Our contact info is freely available. We’ll give you a shout out as well. And don’t forget to review us on iTunes if you appreciate what we’re doing.