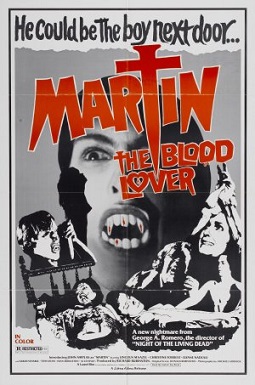 With the passing of George Romero, on this episode of the Really Awful Movies Podcast, we look back at the famous horror film director, and examine a real classic from his oeuvre: Martin.

“He could be the boy next door,” is the tagline, and this “boy” (played by John Amplas) is en route by train from Indianapolis to Pittsburgh, where he is put under the care of great uncle Cuda.

Along the way, we get a glimpse of the “vampire” in action (the question as to whether Martin is a blood-sucker is open-ended indeed), where he feeds on a fellow passenger, knocking her out cold with an anesthetic before meeting Cuda on arrival in the Steel City. It’s an unsettling scene, creepy as all hell, in a film with many wonderful, shocking, and memorable vignettes.

Martin is a strange beast, a terrific film that explores some of the rich themes Romero brings up in Night of the Living Dead, Day of the Dead, and Dawn of the Dead: man’s inhumanity to man, the “undead” as a reflecting of ourselves, the animalistic nature of our being, corralling chaos into order…and many more.

Here, Romero deftly uses Martin as a conduit to tell a coming-of-age tale, a family drama (which just happens to have a bunch of juicy murders along the way), where a youngster is just trying to find his way in an often confusing world. This, as Martin struggles to controls his Freudian “drives” and turns to a late night talk show to provide a sounding board for the modern-day difficulties inherent in being an Old World vampire. Assuming he is Nosferatu, which is a big assumption.

So join us as we remember George Romero, Toronto’s adopted son, and the man who made horror films critically acceptable (to a point). Sure, he’s known for bringing zombies into the public consciousness, but let’s not forget that Martin completely upturned expectations surrounding the vampire mystique.