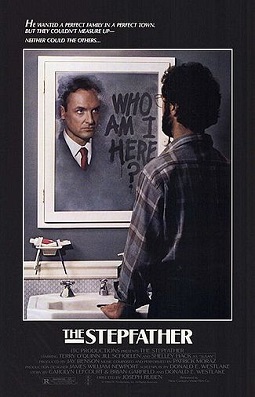 The Stepfather is a unique horror / thriller, featuring an amazing performance by Terry O’Quinn.

On this episode of the Really Awful Movies Podcast, a discussion of the long-lasting appeal of The Stepfather, how we came to have it cross our radar, and the phenomenon of depicting divorce and blended families on television in the 1980s.

The film, directed by Joseph Ruben (who most will know from his work behind the camera directing Sleeping with the Enemy and Money Train) is an understated, low-key flick with a few over-the-top moments of inanity. Still, there’s much going for it (solid performances and a killer score) and it inevitably spawned countless sequels.

In a suburban enclave in Washington State, we see button-up business man Henry Morrison (O’Quinn). He washes off blood in a bathroom, cleaning up the aftermath of a crime scene.

This is before changing his appearance (snipping off a ratty beard) and putting his belongings into a suitcase, and tossing them into Puget Sound.

After packing his things, Henry leaves through the front door of his house, nonchalantly passing the butchered remains of his family in the living room. One year later, Henry — now operating as an uber square real estate agent named Jerry Blake in the suburbs of Seattle — has married the widow Susan Maine. And Maine has a teen daughter, Stephanie.

The relationship between Steph (Jill Schoelen) and new dad Jerry is strained to say the least.