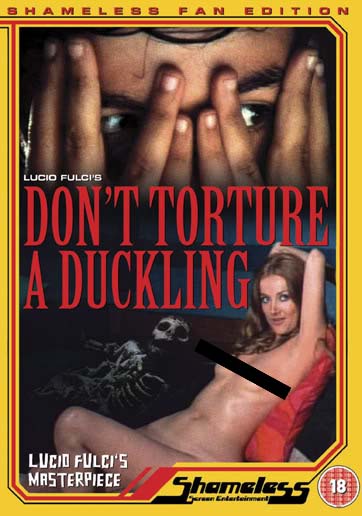 Don’t Torture a Duckling (in mellifluous Italian: Non si sevizia un paperino) is a 1972 Italian giallo film directed by Lucio Fulci, starring Tomas Milian, Florinda Bolkan, and Barbara Bouchet. It is notable within Fulci’s filmography as it is one of the first in which he began using violent icky gore effects, something Fulci would continue to do in his later films, most notably Zombi 2, The Beyond and City of the Living Dead. The soundtrack was composed by Riz Ortolani and features vocals by Italian pop stylist Ornella Vanoni.

Don’t Torture a Duckling focuses on a series of child murders that occur in a small, fictitious town in Southern Italy. Naturally, there are red herrings aplenty, and true to form, a journalist poking his nose around where it doesn’t belong. While there are some similarities with giallo films stylistically, this one tends to eschew some of the genre tropes, including urban center settings.

There is a boundless array of weirdness, and some really odd choices for set-pieces. It’s interesting to note just how varied Fulci’s work was before he set aside his other genre work and began to focus full-bore on horror.