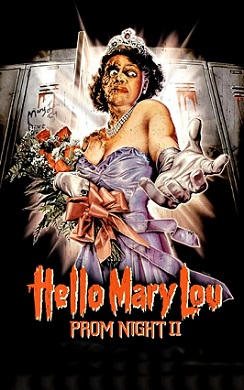 He plays Billy, a 60s teen with an impossibly receding hairline, who’s gettin’ down to Little Richard at the prom. After being rebuffed by the queen, one Mary Lou (from whose name the movie title derives) he angrily lobs a stink bomb toward her as she’s accepting her crown in front of adoring masses. Unfortunately, things go haywire, the incendiary devices ignites a spark, the drapes catch fire, and so does Mary Lou.

Flash forward to the 80s, and Billy is now high school principal at ill-fated Hamilton High. And the spirit of Mary Lou, is haunting the halls, like bad Axe deodorant spray. Mary Lou’s trapped in a treasure chest, and emerges, to haunt those who did her wrong.

Prom Night II doesn’t have Jamie Lee Curtis or Leslie Nielsen (and hell, Robert A. Silverman too, he of Scanners, eXistenZ, The Brood), but what it does have is the same low-budget cheap-and-cheerful Canadiana (it’s filmed in Edmonton, Alberta, with some re-shoots in Toronto). There’s also some supernatural weirdness and sinister dreamscapes going on.

This is a much better film than we remember.