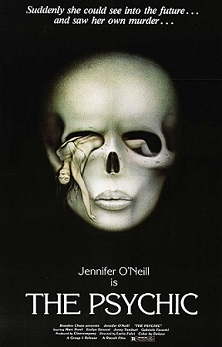 Lucio Fulci’s The Psychic, while not nearly as gory as the canonical Fulci films, nonetheless bears some of the same trademark weirdness, and features…of course…a creepy house.

And in this house…bones are found!

We have a murder mystery on our hands, and blood is on someone’s hands…but whose? The house is owned by Francesco Ducci…and the bones are that of a young woman. Mr. Ducci is a womanizer, once dated the deceased, and that alone is enough to cast suspicions his way.

His sister Gloria, and wife Virginia (the titular Psychic) have to clear his name. And really, all they have to go on are some visions…clues that come to Virginia in a dreamlike state…

It’s these visions which, while not accurate, are accurate enough to get the plot rolling. There’s another married womanizer who dated the deceased, and was seen with her some time before she went missing. Is it him?

The Psychic, also known as Seven Notes in Black, and Murder to the Tune of Seven Black Notes, was filmed two years before Fulci blew our collective minds with his awesome, Zombi 2.

But you needn’t be a Fulci die-hard to appreciate the oddball film that is The Psychic.

Tune in as we discuss the film, and remember, subscribe to the Really Awful Movies Podcast!