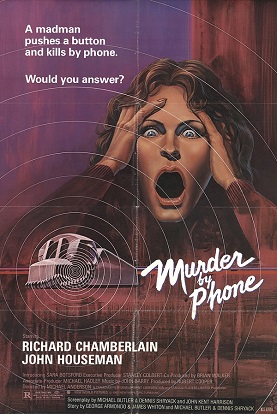 It’s time to talk tech on the podcast! Since we already covered, Don’t Answer the Phone! we thought we’d approach another communications movie, Bells, aka, Murder by Phone! Call it a preoccupation, not a hang up (!) of ours. Oooh, that was deliciously bad.

This one is a Canuxploitation not-quite-classic from the 1980s, back when government-funded drek was all the rage. For whatever reason, Bells has Richard Chamberlain and John Houseman, two actual, bona fide actors. Why? Not sure.

Even Oscar-winning actors have to appear in something called Murder by Phone once in a while.

What’s fun about this crappy flick is that it’s set in Toronto. But not just that. It features the TTC, which we called “Take the Car” as kids, but actually stands for the Toronto Transit Commission. There are also scenes of Bay St, our financial district, and other fun locales.

As for the movie…it’s not much…but killer technology is hella fun, and a killer phone made its way into our book, Death by Umbrella! The 100 Weirdest Horror Movie Weapons.

You’ll enjoy (sorta) this movie. There’s a lot to love, and just as much to loathe. Come join us every week as we champion misbegotten horror, sci fi, action, musical and post-apocalyptic wasteland movies.