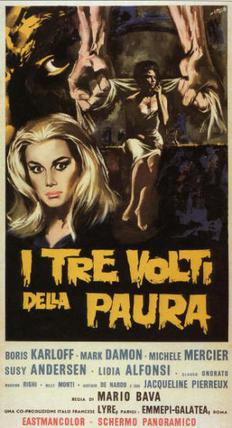 Black Sabbath, aka, i tre volti della paura (The Three Faces of Fear) is a three-part flick that’s harmonious, and lush in color. And to introduce the segments, none other than the legendary Boris Karloff himself.

The original Italian language version of Black Sabbath features the installments in this order: The Telephone (a lady of the evening is tormented by threatening calls from a former pimp), The Wurdalak, a vampiric tale of woe set in a remote cottage in 18th century Eastern Europe, and finally, The Drop of Water, in which a nurse purloins jewelry from a deceased old lady, only to be tormented from beyond the grave.

In 1958, the founders of American International Pictures hired Flavio Lucisano (a talent agent) to look for Italian crossover films. In 1963, AIP made a deal to distribute a bunch of Ital co-productions. Black Sabbath was one of them. There was a trend to make anthology films to keep costs down. And Black Sabbath was no exception, a film that was an 8-week shoot.

While not exactly showered with praise upon release, Black Sabbath has certainly found more defenders than detractors. In fact, Quentin Tarantino was influenced by the story structure for his film, Pulp Fiction.

So…tune in to the Really Awful Movies Podcast as we break down each of the segments. While The Telephone is seen as the slightest (probably with good reason) it nonetheless has a lot going for it and should not be overlooked. The Wurkalak, while long, has enough trademark Bava touches to make it memorable…and for us, the standout is the exemplary, timeless, The Drop of Water – a master class in sensory Gothic Horror.