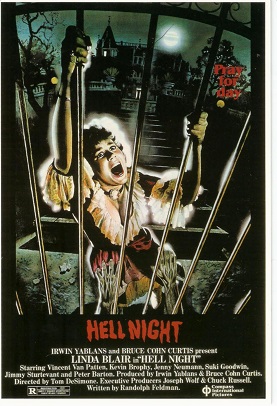 Watching this is a hellish experience. Well, not really, but close enough to warrant the terrible pun. Hell Night is one of those forgotten films from the slasher boom, and only known today because of two things: 1) incredibly cool cover art and 2) the presence of genre icon Linda Blair in the lead role as sorority/frat pledge Marti Gaines.

When a movie has “hell” in the title, there are basically three places it can end up: 1) a stone-cold classic like Hellraiser, 2) perfectly serviceable like The Legend of Hell House, or 3) total ineptitude like Motel Hell. Hell Night is the latter, although not even that fun.

The premise is pretty straightforward: a bunch of pledges are put through their paces in an initiation rite. They have to spend a night at a dwelling where SOMETHING TERRIBLE TOOK PLACE.

This is boilerplate horror, stretching back to House on Haunted Hill with Vincent Price. And with the frat kick, it’s a bit like Pledge Night with that singer from Anthrax with the poodle hair who is killed in a frat stunt. Either way you slice it, Yawn Town population, you.

So, in a perfect world, what do you get when there’s a neat backstory, attractive people and a scary scene setting? Usually, there’s a twist, nudity, and filmmakers exploiting the terrifying sense of place. In Hell Night, none of the above happens, which is…hella weird, it should be said.

Hard-partying coeds are all talk (and all clothed). The killer isn’t all that interesting…and the “haunted/cursed” house is pretty and candle-lit, but meh.

On this episode of the Really Awful Movies Podcast, we put this film in context.

We talk about our indifference to Linda Blair post-Exorcist, we chat about Passover seders (for the first time on the show!), silly plot devices, heroism in Hell Night, the old house motif, Italian Gothic horror, and movies similar to this one.

Don’t forget to subscribe! We have new episodes every Friday.