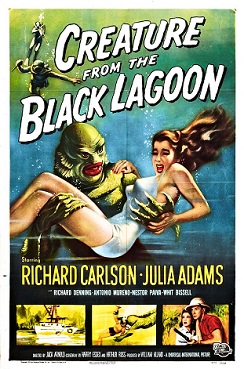 A geology expedition in the Amazon uncovers fossilized evidence of a mysterious creature in the form of a skeletal hand with webbed fingers.

On this episode of the podcast, travel to Brazil with us (OK, Florida) as we discuss Creature from the Black Lagoon.

Expedition leader Dr. Carl Maia (Antonio Moreno) orders his two assistants to stay in camp while he visits the marine biology institute to get answers about his find.

Maia reunites with his friend and former student, ichthyologist Dr. David Reed (Richard Carlson). Dr. Reed works at an aquarium in California, but more recently he has been a guest at Maia’s institute in Brazil to study lungfish. Reed persuades his boss, Dr. Mark Williams (Richard Denning), to fund a return expedition to the Amazon to look for the remainder of the skeleton down river.

Soon, the research expedition gets wind of a certain gilled amphibious humanoid thing down in the depths.

Director Jack Arnold’s first foray into the science-fiction genre was the fun, It Came from Outer Space (1953). Jack achieved his greatest enduring cult popularity with this film, a well-crafted reworking of “Beauty and the Beast”. Revenge of the Creature (1955) was a (semi) worthy sequel.

Critic Leonard Maltin said about the film that it was an “Archetypal ’50s monster movie has been copied so often that some of the edge is gone, but … is still entertaining, with juicy atmosphere and luminous underwater photography sequences.”