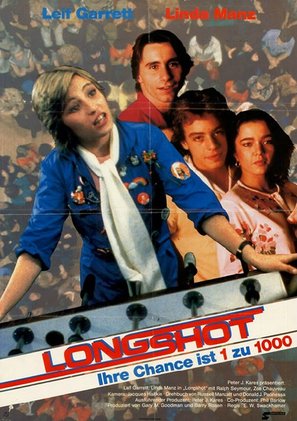 Longshot is, wait for it…a movie about foosball. Of all things.

With the Champions League and the World Cup, soccer is on a lot of people’s minds, and always is. After all, it’s the world’s most popular sport. But foosball? The dopey, loud, largely unsatisfying bar/rec room/basement parlor game? It’s enough to make your head spin, forget the little plastic men.

This foosball, is tied to football, er, soccer. Paul Rodgers (played by ex-teen idol Leif Garrett) wants to be the next Zidane/Beckham. So he turns down a scholarship at a US college, in order to pursue his dreams….ON THE FOOSBALL CIRCUIT. You see, there’s a 50k grand prize. And if he wins, he can get himself over to Europe and maybe make it in the Premier League?

But this is Bush League stuff.

As the poster here says, “your chance is 1 in 1000,” terrible odds, especially when frittering away an academic scholarship for some pipe dream. Er, Longshot.

Paul and Leroy are 18-year-olds about to make their way to Lake Tahoe where this prestigious event is being held. Unfortunately, through some mechanism we can’t for the life of us remember, Leroy injures his spinning hand (forgive us if we’re not too well-versed in foosball vocab). So Paul enlists the help of 13-year old Maxine. Because that’s what 18-year-olds do, they cross state lines with minors and stay in motel rooms with them. WTF?

That’s a proposition that beggars belief. Much like squandering a chance at funding your post-secondary education on some dopey tournament. Unless your competition had thalidomide arms, it’d probably be anyone’s game.

We podcasted Manos: The Hands of Fate, one of the most boring films ever committed to celluloid. And this is that film’s easy rival. It’s agonizing on every level you know, and on some you don’t.

After all, how in hell could foosball be rendered cinematically?

Who thought this movie was a good idea?

We’ll break it down for you!