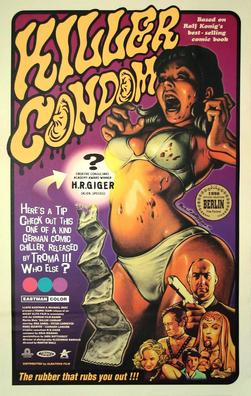 Killer Condom! The title is pretty self-explanatory. Leave it to Lloyd Kaufman, one of our heroes, to pick this thing up for North American distribution so that people on these shores could be Troma-tized by the film.

A German language comedy horror set in New York City, Killer Condom does what few comedy horrors have managed to do, and that is successfully mix horror and comedy in equal measure. That’s not an indictment of comedy-horror at all, it’s merely the fact that one usually comes at the expense the other.

Set in squalid pre-Giuliani New York City, Killer Condom follows our grumbling, embittered hero, gay Detective Luigi Mackeroni (Udo Samel). The NYPD man has been hired to investigate a series of bizarre attacks at the Hotel Quickie, a 42nd Street flea-bag motel where male guests have all had their penises mysteriously chomped.

While at the scene, he hooks up with a gigolo named Billy and invites him up to the scene of the crime. Before the twosome engage in sex, a carnivorous living condom coitus interrupts them and bites off Mackeroni’s right testicle.

Down one ball, Mackeroni makes it personal. He begins a quest to bring a halt to the tumescent tumult.