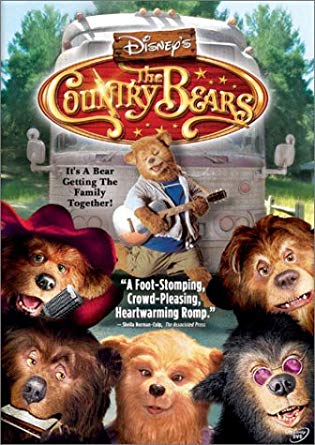 Animatronic country music-playing bears in a movie based on a Disney attraction. How could this go wrong? Or another question, How is this even possible? On the Really Awful Movies Podcast, we pride ourselves on tackling all sorts of disparate different genres, so hot on the heels of talking about C.H.U.D., here we are yakking about The Country Bears. Haven’t heard of it? You’re not alone. This was a big fat bomb, despite having a bunch of big names attached to it: Elton John, Wyclef Jean, Willie Nelson, etc.

Beary (that’s a homophone of “Barry” as you likely figured out) is a young bear who runs away from his adopted human family, to track down, and ultimately reunite the titular Country Bears band.

Is it a “foot-stomping, crowd-pleasing, heartwarming romp” as the poster suggests? This is a legitimately terrible film, and yet it’s somehow endearing, a bit like a rusted husk jalopy that’s been dragged out to the scrap heap for crushin’.

There are some admittedly fun musical numbers, as well as some bonkers cameos by the likes of Eagles front-man Don Henley, and blues belter Bonnie Raitt.

So how does this film, er, raitt? Tune in and check out this special episode of the Really Awful Movies Podcast. This is the second pretty bad musical we’ve invested ourselves with in as many weeks…we do kinda love musicals, especially wacko ones like The Apple and Xanadu. Guess this falls in the same camp.