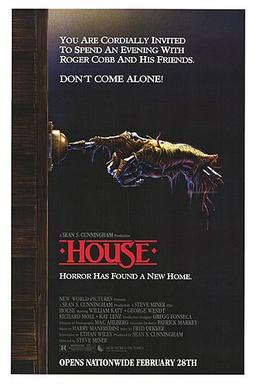 House. Here we go. We’re back to the 80s on this episode of the Really Awful Movies Podcast. It’s House, which stars three stalwarts of the TV world:William Katt, George Wendt, and Richard Moll (The Greatest American Hero, Cheers and Night Court).

Katt portrays a novelist, Roger Cobb, who needs a place of quiet contemplation to get some writing done. You’ve heard that one before, right? He takes over the domicile of his late aunt, whose suicide he’d witnessed as a young lad.

Soon, “his friends” start to join him (as the poster says).

One night while investigating a noise coming from his late aunt’s bedroom, the author is attacked by a deformed, hideous monster that’s been lurking inside the closet. Soon, more attacks occur: Cobb is attacked by levitating garden tools, and he begins to see visions of his ex wife and missing son.

Eventually Cobb discovers an entry into a sinister PORTAL TO HELL.

His jovial neighbor (and devoted fan), Harold (Wendt) offers a kind ear as he’s melting down.

House is best known for its poster, and yet it inexplicably spawned numerous sequels. Why? It’s because that was the thing to do. Especially if Sean S. Cunningham was involved.

House was directed by Halloween H20 director Steve Miner (interested folks can check out our discussion of that film). Is he up to the task?

What is the meaning of a homestead?

Where does this one fit in the haunted house realm?