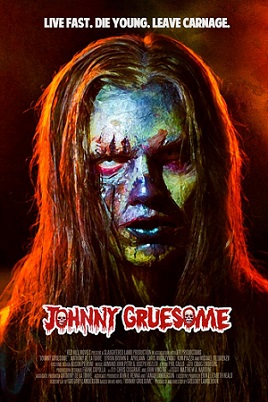 On this episode of the Really Awful Movies Podcast, Johnny Gruesome. This is the latest offering by Greg Lamberson, who brought us what is essential viewing if you’re into urban scum/exploitation horror flicks, Slime City. It’s a site favorite here, along with Street Trash.

In this one, Johnny Grisholm is a long-haired drug-fueled hell-raiser. He’s perpetually wasted, and is the product of a broken home, and alcoholic dad. One night, with friends in tow, he’s lead-footing it down the highway in his roadster. He’s driving so erratically, they begin to fear for their lives. His buddy Charlie puts him in a choke-hold, the vehicle swerves into a guardrail, and Charlies finishes the job – asphyxiating his pal.

The remaining friends protest, but concede that Johnny likely would’ve killed them all had there not been such a violent interceding.

Then, as the IMDb summary aptly has it: “he returns from the grave as a revenge crazed supernatural creature.”

In Pledge Night, the antagonist is a victim of a college hazing ritual, and returns to exact revenge. Here, in a similar fashion, Johnny emerges from the grave a posthumous one-teen wrecking crew.

Johnny Gruesome has keen attention to the high school environs, and accurately depicts headbanger/dirtbag culture. Hell, one half expects Ben Affleck to saunter in from Dazed and Confused to kick Johnny’s skinny behind.

Tune in to this episode (and every episode) of the Really Awful Movies Podcast. We love genre film, particularly horror, and getting down to the nitty gritty of what makes these films so darn fun.