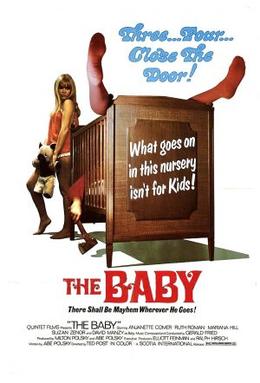 Whoa. This is one for the ages. The Baby is another strange duck, a piece of 70s exploitation that’d be impossible to make today. A family, the Wadsworths, are raising their 20-something son as a baby. Known only as “The Baby,” (or “Baby”) he’s clad in diapers and left to crawl around the family home in a state of deprivation.

Ann Gentry is a social worker poking her nose where it doesn’t belong. She establishes a rapport with Baby but her efforts to get through to him are thwarted by the family.

Baby has never been permitted to speak, walk, or do things for himself at any level, receiving negative reinforcement in the form of beatings or restraints whenever he attempts to try. Baby has been forced into his state of perpetual dependency and infantilism since his actual infant-hood.

The Wadsworths grow tired of Ann’s meddling and try to dispose of her during a party.

On the Really Awful Movies Podcast, we frequently delve into oddball, surreal, and very transgressive films. This one certainly counts.