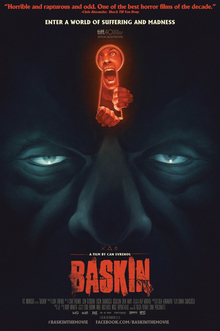 On this episode of the Really Awful Movies Podcast, a sensational, Italian-style hard-horror coming to us from of all places, Turkey. Baskin debuted at TIFF’s Midnight Madness and caused a bit of a stir. And rightly so.

Now, Turkey is known for a spate of rip-off movies. There’s a Turkish Star Wars, Star Trek, E.T., Superman, Exorcist, Death Wish, and they’re all unbelievably bad. But of course, the country has produced some great cinema too.

Baskin is a dreamscape that follows six reprobate policemen, officers of the law who are by all accounts louts and shouldn’t really be in charge of keeping order. While on call to a remote town, the driver thinks he sees a figure dart out onto the road, swerves to avoid it, and puts the police van in the ditch.

From there, the men emerged with bruised egos and wet clothes, but face a much more perilous predicament. The group, comprising some jaded veterans but also young bucks, venture into the forest. It’s there they might a group of demented hillbilly folk. But expect the unexpected. From there, they explore a precinct abandoned since the glory days of the Ottoman Empire.

Baskin is a marvel. Bask in its glory (apologies). The film debut of Can Evrenol, based on his 2013 short film by the same name, is influenced by all the good stuff. While not exactly re-inventing the wheel, it pays home to (but doesn’t rip-off) the godfathers of Italian horror: Bava, Fulci, Argento.

On this episode, we talk Turkey (apologies again, dammit). What makes this film so unnerving and odd? What is it about Turkish culture that produced something so transgressive? We dive in headlong.

It’s available through Raven Banner. Buy it, track it down somehow…and listen to our chat!