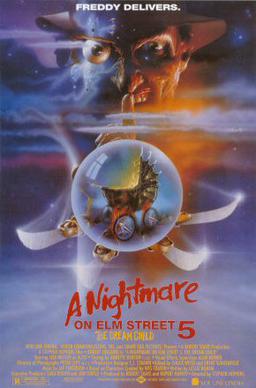 Not heralded upon release, A Nightmare on Elm Street 5: The Dream Child was a film we deemed worthy of a revisit to see how it’s aged.

So, is this the Tom Cruise of sequels? Or is this an installment that needs to be shot full of Botox? Interestingly (and this came as a shock to both hosts of the Really Awful Movies Podcast), this one is not only not half-bad, it’s actually a very worthy entry into the iconic Springwood Slasher series.

A Nightmare on Elm Street 5 sees a return to form for the gloved one, a nightmare to children everywhere (Michael Jackson jokes at this point are a little passe). Less quipster, more killing, this Freddy is one we came to know and love.

In this one, there’s a fetus, a dreaming baby that’s the conduit for Freddy’s return to wreck havoc on the denizens of Elm Street. It’s a bizarro conceit, but hella-cool too. You gotta just accept and run with it.

Are the performances great? Not particularly, but Freddy’s kills and the audaciousness of the plot carries the day. Who would’ve thought? A Nightmare on Elm Street 2: Freddy’s Revenge was not one we fondly remembered either, and yet we found some nuggets of cool therein as well. So, tune in and check out the Really Awful Movies Podcast. This is the third Nightmare on Elm Street film we’ve discussed. Dig through our archives and unearth the others, you’ll be glad you did.