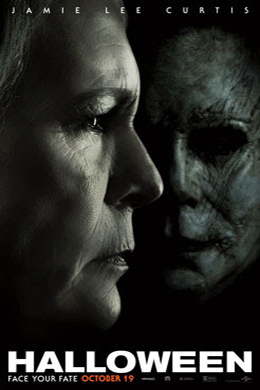 Forty years have passed. “The Shape” has been confined to a mental hospital. Not only have forty years passed, Dr. Loomis has has well. In his stead, Dr. Sartain (a name, as forgettable as many elements of his film). The doc allows two Brit investigative journalist/podcasters to see if they can connect with Michael, who has been conspicuously mute for seemingly forever. They are allowed into the facility for the criminally insane. Michael Myers is not having any of it, and remains uncommunicative. One of the podcasters starts brandishing a replica mask, goading him.

Here we are folks. It’s Halloween, a film with big boots to fill. The original is a stone-cold classic, one of the best horror films of all time.

How does this one stack up? Laurie Strode (Jamie Lee Curtis) is a grandmother now, still haunted by fears of Michael. She is a survivalist, estranged from the family, holed up in an armed compound with provisions, tons of arms, etc. Seems like she has a right to be worried. You see, in that time honored cliche tradition, there’s a prison transfer. Michael is being sent to another facility. You know what happens, right?

If you don’t, it’s disclosed in the trailer.

So now it’s up to Laurie Strode to put an end to the Bogeyman forever. Will she? Tune in!