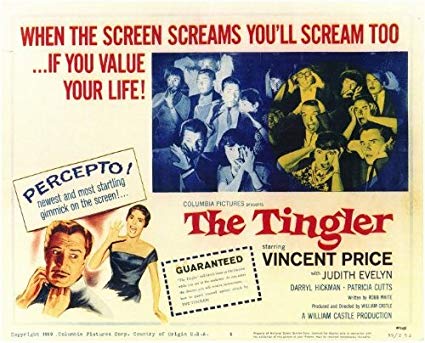 Part artist, part huckster, William Castle is a name a lot of people know in the horror world. He produced Rosemary’s Baby (and would’ve directed too, were it not for health issues) but he’s best known for the gimmicks he deployed to promote the living heck out of his movies.

The Tingler, starring the legendary Vincent Price (check out our interview with his daughter, Victoria Price) is one such movie. Castle used “percepto” technology, a buzzer installed beneath some theater seats that literally shocked members of the audience!

The cost of this equipment added $250,000 to the film’s budget, which was negligible by comparison. Percepto was used sparingly and in predominantly larger theaters for logistical reasons.

The premise is delicious: Price stars as Dr. Chapin, a prison coroner responsible for doing autopsies on prisoners on death row (this seems like a waste of time and money, but that’s neither here nor there). A side of interest of his: how humans experience fear. He and a lab assistant speculate that there’s a structure on the spinal cord that is associated with fear responses (hence, “spine-tingling” fear).

Dr. Chapin uses his wife as an unwitting participant, scaring her with a starter pistol and doing an examination on her spine.

The Tingler is a fun movie, a corny monster movie / creature feature from the 1950s. And there’s the bonus of Castle himself introducing the film, and warning of the terrors to come. Hilarious!

On this episode of the Podcast: