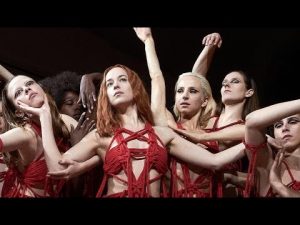 So, here we are. Suspiria 2018 is a remake of the all-time great Dario Argento 1977 film. The Argento one is one of our mutual favorites. It’s definitely in our Top 15 Horror Films of All Time, if we were to make such a list (to get a sense of our sensibilities, the other entries would include Maniac, Martyrs, A Nightmare on Elm Street 3: Dream Warriors, to cite a few).

So, we faced this one with some trepidation, some anticipation, but mostly that time-honored sensation felt by many a gore-hound: PLEASE, for the love of all things holy, don’t F this up!

Luca Gadagnino is apparently also a great lover of the Argento film. And you can tell. He does a loving tribute, but does so in a way that’s so different from the original that it can operate as its own entity.

Apart from the American student, the German locale, the ballet school, and the coven therein, there is not too much tying this 2018 Suspiria to the original one.

On this episode of the Really Awful Movies Podcast, we do a deep dive comparing the two. On the show, we talk about:

And much, much more (including some Goblin whistling!)