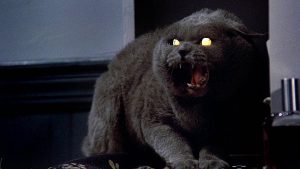 In this installment of the Really Awful Movies Podcast, the hosts do a side-by-side comparison of these two indelible horror genre films, the 1989 vs the 2019 Pet Sematary. So, what’s the fuss all about?

The original, while not a runaway hit, has its backers as well as detractors. While the remake has a whole slew of detractors. Perhaps it’ll take a while for people to warm to it, but that’s unlikely.

The story is familiar to most: a cat is run over on a New England highway. And the father, along with a neighbor accomplice, buries the thing only to have it return.

The characters are terrific, as well they should be. After all, Stephen King wrote the source novel (and King even wrote the screenplay to the 1989 original).

While many of us are sick to death of cat scares, we will make an exception here with Pet Sematary (both films). Church the cat (derived from Sir Winston Churchill) is a bona fide animal star. Even if the movie built around him, is more of an asteroid than a sun.

Still, as is the ethos of our podcast, we celebrate as much as we criticize. We hope we were being fair to Pet Sematary, both versions.

If you haven’t seen either, do so. And definitely rock out to the stand-out Ramones song of the same name. You’ll be glad you did, and you’ll be glad to listen (we hope) to the Really Awful Movies Podcast.