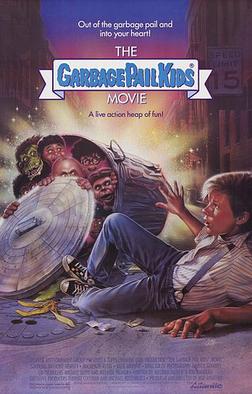 Ah, another cheap product cash-in. We love our oddball movies, and The Garbage Pail Kids Movie is certainly that.

As tonally off as any movie we’ve discussed on the Really Awful Movies Podcast, we were nonetheless thrilled to visit this bizarre late eighties entry.

The plot: a kid, Dodger, is being bullied. He seeks the sagely advice of the owner of an antique shop, who also happens to have among his chachkas/wares, a garbage pail meteorite.

The proprietor warns the youngster, that while he’s working a shift, he is absolutely not to touch said trash can. But touch he does, and bam, a bunch of creatures are unleashed. Based on the toy/bubblegum cards and short-lived TV show, The Garbage Pail Kids were meant to lampoon that craze of toyland, The Cabbage Patch Kids.

Anyway, there is lots to love about this rather weird little gem. At no point in its short run time, does it not bewilder and amaze with its weird choices. There is a love interest for Dodger, who looks to be considerably older than he is, in an age-inappropriate romance (and yet the lovebirds in real life were a mere year or so apart). There are dreadful songs, weird animatronics, and more.