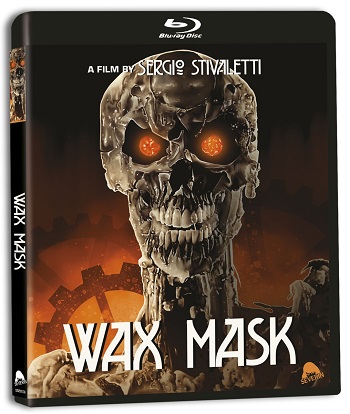 This week on the podcast, another foray into one of our favorite horror sub-genres, Italian horror! The Wax Mask is an olive branch of sorts, extended from one rival to another, Dario Argento to Lucio Fulci, towering giants of Italian horror. The latter was in ill health, so Argento along with long-time Fulci collaborator/effects guru Sergio Stivaletti executed this one for him.

A re-imagining of Vincent Price’s horror-thriller House of Wax from 1953, this one also features another evil wax museum curator up to no good in what’s supposed to be Belle Epoque Paris (filmed in Rome). Released in 1997 (Severin released a pristine blu-ray edition of The Wax Mask with a bunch of cool special features).

A john from a local brothel turns up dead, not an unusual occurrence in 1900s Paris, but here his cause of death is fright and he turns up belly up in the local wax museum. A journalist, Andrea, begins investigating and poking around the institution to see what’s up.

On this episode of the Really Awful Movies Podcast, we talk about how we got into Italian horror, how Lucio Fulci worked in different sub-genres, the differences stylistically between Argento and Fulci, the films that scared us as kids, wax museums in Niagara Falls, London and Berlin, and much, much more.

Take a listen and subscribe to the podcast, where we focus on genre films of all stripes, particularly horror and action movies.