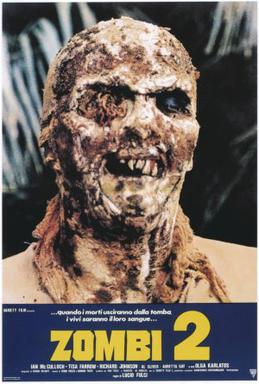 Lucio Fulci’s Zombie, aka Zombi 2 (and a whole whack of other things) is a 1979 Italian zombie film adapted from an original screenplay by Dardano Sacchetti to serve as some kind of sequel to George A. Romero’s Dawn of the Dead (1978), though it strays pretty far from that source material.

The film features a boat mysteriously abandoned and drifting around lower Manhattan. When NYPD tries to board, they’re met with a disgusting, desiccated undead thing.

How that thing got there, is how McCulloch gets involved, portraying journalist Peter West.

The vessel is registered to a guy traced back to the island of Matul, somewhere in the Caribbean.

What was he doing there? What nefarious goings on were taking place? How did that gross creature end up in New York? These and a whole host of other questions are answered this week, as the Really Awful Movies Podcast takes you to Italian horror territory and this classic gut-muncher, Zombi 2.