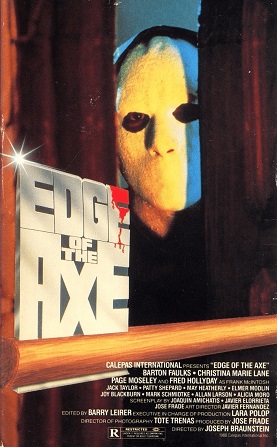 On this week’s podcast episode, perhaps the 7th most notable axe murderer horror film of all time, Edge of the Axe.

Sure, this Michael Myers-visaged villain swings an axe, yet he remains far less well known than those maniacs in Silent Night, Deadly Night, Madman, Silent Night, Bloody Night and the granddaddy of all axe murderin’ movies, The Shining.

Still, this Spanish / American co-production has its defenders (namely, us). Edge of the Axe is a rip-roaring good time, variously filmed in Big Bear, California, and Madrid Spain, with a bunch of townsfolk being picked off one by one by a figure cloaked in black and wearing a white mask.

And the police are dumbfounded as to who could possibly be committing these heinous acts. This one was released near the very tail-end of the slasher boom, and it shows. It’s definitely quite unique and there’s a lot going for it, particularly the quirky characters, the strange Gothic Euro feel, and much more. Tune in!