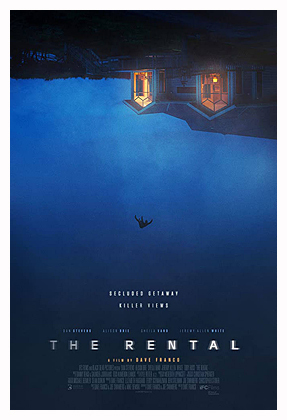 Two brothers and their significant others rent a sprawling seaside mansion, Air B’n’B-style.

In this episode of the Really Awful Movies Podcast, Dave Franco’s The Rental.

In his directorial debut, Franco, who also co-wrote the script, casts wife Alison Brie (Community/Mad Men) in one of the leads. She plays Michelle, and her beau Charlie (Dan Stevens) is a startup superstar entrepreneur. Charlie’s brother (Jeremy Allen White from Shameless) is a bit of a loser with a criminal past, who feels like he isn’t good enough for his love, Mina (Sheila Vand). She’s also his bro’s business partner in the Bay Area.

The trip gets off to a rocky start when Mina suspects the home’s caretaker of being an Islamophobe and all-around a-hole. However, the foursome has invested time and money in this weekend getaway, and figure it’s best to let things lie.

Before too long, Mina and her boss get a bit too close for comfort when their partners pass out early. And that is when tensions really ratchet up.

The Rental is pretty damn good as a directorial debut, with good characterizations and atmosphere, marred by a bit of a goofy antagonist. Still, sharp, surprising and with enough twists to more than warrant a recommendation.

Join us on the latest episode of the show.