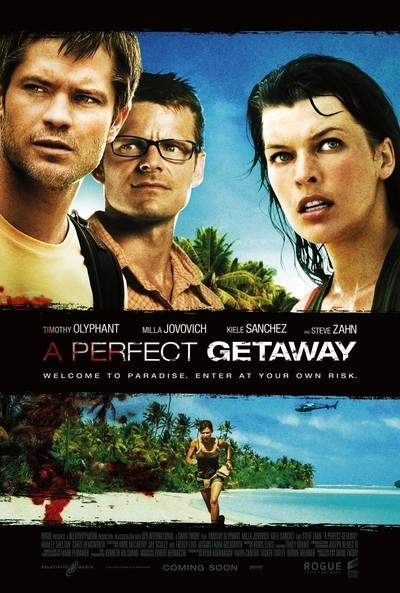 Not a horror per se (however defined), A Perfect Getaway is a 2009 release that’s perhaps more of a thriller (but why quibble?)

On this episode of the Podcast, a discussion of the David Twohy-directed flick. Twohy also responsible for GI Jane and The Chronicles of Riddick with Vin Diesel, and he acquits himself quite nicely as a horror/thriller director despite an action pedigree.

In the film, we get a terrific cast: Timothy Olyphant (Deadwood/The Crazies), Milla Jovovich (The Fifth Element/Resident Evil), Steve Zahn (Reality Bites) and Marvel and Cabin in the Woods’ Chris Hemsworth.

They play different couples on vacation in Hawaii (ah, vacations…remember them?). They’re trekking about in the sublime islands, when word gets out about a murder perpetrated by a couple on a neighbouring island.

Zahn is a nerdy screenwriter, with Jovovich his square wife. They encounter a tough-talking military special forces guy (Olyphant) and his hippie girlfriend, and things take quite the turn.