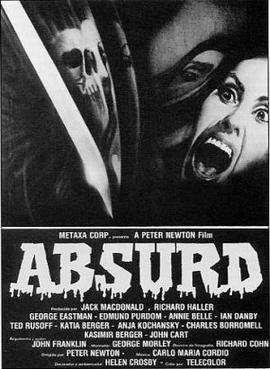 On this week’s episode of the Really Awful Movies Podcast, a bit more Italian horror for ya.

Welcome to a discussion of Absurd, which goes variously by Anthropophagus 2, Zombie 6: Monster Hunter, Horrible and The Grim Reaper 2 in keeping with the title multiplication common to Italian exploitation genre cinema.

It’s a batty 1981 slasher directed by multi-talented director Joe D’Amato and starring the towering figure of George Eastman (all 6’9 of him) who wrote the story and the screenplay – though that’s not exactly anything you’d really want to cop to.

Eastman plays Mikos, the subject of a mysterious Vatican experiment from which he’s on the lam. The monsignor who helped create him, Frankenstein-style, is chasing after him. The madman gets impaled on a high fence, kinda like Hell Night (which we podcasted a while back). But, like Mike Myers, he’s hard to kill (or rather, like Steven Seagal, he’s hard to kill!).

Mikos is revived at the local hospital, which is bad move. They should not have resuscitated him. The priest informs the hospital and authorities that the only way to kill Mikos is to ‘destroy the cerebral mass,’ whatever the hell that is.