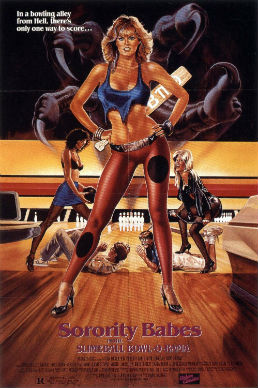 Sorority Babes in the Slimeball Bowl-O-Rama. What a title, right? This is a wonderful, cheeky, low-budget effort that’s a creature feature and based around the infamous short story, The Monkey’s Paw.

Some nerds and some sorority pledges have to bust into a bowling alley to steal a trophy to prove their mettle. While inside, they encounter an imp, but not just any imp: a wish-granting imp!

And this imp, ain’t no wimp. Soon, some of the sorority sisters are turned into rapacious she-demons and all hell literally breaks loose. Good times, good times!

Genre heads will get a kick out of the cast, which includes Scream Queen Linnea Quigley, but also Robin Rochelle, who starred in Slumber Part Massacre and American Ninja 4 before her untimely, young passing.

Tune into this one, which was distributed by the legendary Charles Band, whose book I’m reading now.