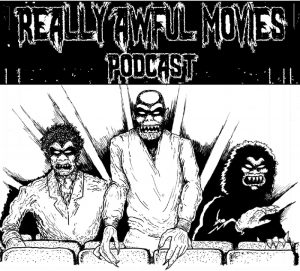 The Really Awful Movies Podcast is just a name. The movies aren’t really awful (although they can be). The title was inspired by the phrase “Why do you watch those awful movies?”

Really Awful Movies is primarily a horror film podcast, but frequently features all kinds of low budget genre cinema, whether it’s martial arts films, musicals, monster movies or sci fi gems that get no love or have been relegated to the far reaches of YouTube or Netflix. We’re part of Eli Roth’s CryptTV Family.

You can hear our reviews and interviews every week on the Really Awful Movies Podcast. [Here is the show on iTunes]

Here’s what the critics are saying…