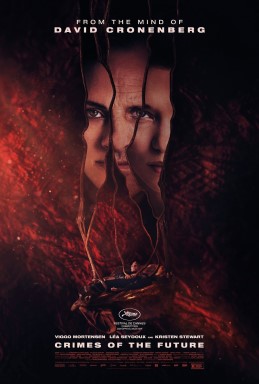 On this week’s episode, Crimes of the Future. Let’s get gooey and check in with this David Cronenberg effort, a real return to form.

Crimes of the Future is a 2022 science fiction body horror drama film written and directed by David Cronenberg. The body horror flick stars Viggo Mortensen, Léa Seydoux (Midnight in Paris) and Kristen Stewart. The film follows a performance artist duo who perform surgery to audiences, in a future world where human evolution has accelerated.

The film marks Cronenberg’s return to the science fiction and horror genres for the first time since eXistenZ (1999). Unfortunately, it bombed at the box office. Don’t let that stop you! 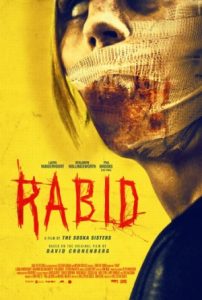 On this episode of the Podcast, the Soska sisters’ reimagining of the Cronenberg classic, Rabid.

So, does it succeed? Given how low the bar is set for remakes, the answer is yes…but not a resounding yes. In fact, this is a very very flawed flick.

Tune in, take a listen, as we contextualize the film with a contrast to the iconic, Montreal-lensed original from 1977.