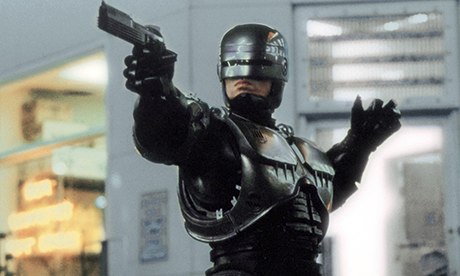 Robocop features the incredible Peter Weller (who has since earned a Ph.D. at UCLA, in Italian Renaissance art history) as the eponymous cyborg crime-fighting machine.

Detroit was once a Midwestern economic powerhouse but went into precipitous decline and became crime-ridden (it’s yet to recover). Whether you blame Reagonomics or the endless succession of Democrat mayors since the 1960s, “the D” is a shell of its former self.

What it is though, is perfect fodder for sci fi action films. And Robocop beautifully showcases a city in decline in this movie classic.

We love Detroit though; and we love Robocop.

Directed by Paul Verhoeven, RoboCop was written by Edward Neumeier and Michael Miner. Alongside Peter Weller, there’s Nancy Allen, Dan O’Herlihy, Kurtwood Smith, Miguel Ferrer, and Ronny Cox. That’s pretty much a genre movie all star team right there. Ferrer was in Traffic, and Twin Peaks: Fire Walk with Me. And Cox starred in that stone-cold all-American classic, Deliverance.

Set in the near future, RoboCop centers on police officer Alex Murphy (Weller) who is brutally murdered by a gang of criminals. Really, how other way can you be murdered but brutally? He is subsequently revived by the megacorporation Omni Consumer Products (OCP) as a superhuman cyborg law enforcer, from which the movie gets its name.

Themes that make up the film include include media influence, gentrification, corruption, authoritarianism, greed, privatization, capitalism, identity, dystopia, and human nature. It received solid reviews and was cited as one of the best films of 1987, spawning a franchise that included merchandise, two sequels, a television series, a remake, two animated TV series, a television mini-series, video games, and a number of comic book adaptations/crossovers.