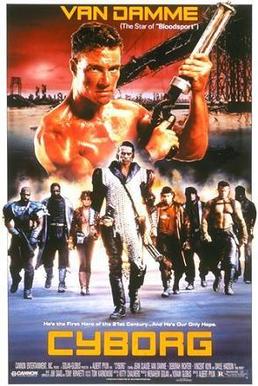 We’re huge fans of bat-shit insane production company, Cannon Films. Surprisingly, they put out Barfly, in addition to the usual spate of lovable crap like Ninja 3. In the late 80s, bad business decisions brought the once mighty Cannon to their knees.

Cyborg, the last Cannon flick to garner a theatrical release, was re-purposed, originally having a bigger budget. What we’re left with is a strange, existential, low budget and quite amazing flick.

It is a 1989 American martial-arts cyberpunk film directed by Albert Pyun (Kickboxer 2 and many low budget action flicks). Jean-Claude Van Damme stars as Gibson Rickenbacker, a mercenary who battles a group of murderous marauders led by Fender Tremolo (OK, we get it with all the cheap-o guitar references).

They were doing a Masters of the Universe sequel, but because Cannon was barely solvent, they couldn’t afford the rights of that property and also Spider-Man. They had sets built…and they had Jean-Claude Van Damme…so they had to do something…well, they had to do…this!