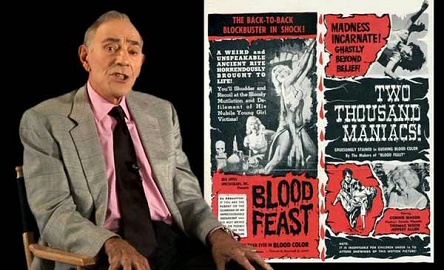 Herschell Gordon Lewis is a maverick. He’s the man behind the splatter genre, directing what is arguably the first of its kind, Blood Feast.

The “Godfather of Gore,” spoke to Jeff from Florida.

His movies were groundbreaking. Without his low budget shlock, we wouldn’t have Friday the 13th or The Texas Chainsaw Massacre.

Lewis and partner David Friedman ventured into uncharted territory with 1963’s very bloody Blood Feast, considered by many to be the first “gore” film (if you’d like to hear our take on that film, check out Episode 61 of the podcast).

The duo was doing juvenile delinquent films, and nudie-cuties and then was able to cater to the the drive-in theater market with Two Thousand Maniacs! (1964) and Color Me Blood Red (1965).

The self-effacing Lewis discussed how he got into exploitation films. Blood Feast, had “a lack of any talent, from acting to production…and zero budget.” And yet people “clamored to see it!”

Lewis weighed in on the 80s splatter boom, which he reluctantly helped usher in.

He also talked about the movie, The Wizard of Gore and star Ray Sager. They shot the film in 1969 in Chicago, for a pittance. It’s about the mad, Montag the Magnificent, a magician who performs mutilation tricks.

Lewis has recently made a film titled Herschell Gordon Lewis’s Bloodmania,  a horror anthology film involving him and Canadian filmmakers. It was filmed in Alberta.

Lewis is an interesting fellow. He took a lengthy hiatus from movies and wrote business/marketing books! He’s something of a pioneer in the field of direct marketing; something you would not expect. But he speaks to us directly, through his quirky, bloody movies.