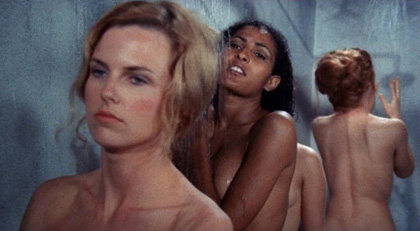 The Big Doll House is a 1971 American women in prison (WiP) film, produced by the one and only Roger Corman and starring the incomparable Pam Grier.

Filmed in the Philippines (one of our favorite locales) and directed by the talented Jack Hill (Coffy/Foxy Brown), Big Doll House also features the amazing Sid Haig (The Devil’s Rejects).

The plot is about as skimpy as the inmates’ attire: an inmate, Collier, is found guilty of murdering her husband and introduced to the joint. Therein is a cadre of some of the more beautiful jailbirds you’ll ever see – forget the gritty realism of Orange is the New Black. Collier’s cellies include a political dissident and an addict in the throes of heroin withdrawal. And this motley crew, which includes the domineering Pam Grier (as Grear) plots their escape with help from two dim-witted males inexplicably granted prison-wide access to deliver fruit.

Because this is a WiP, there’s a sadistic prison guard and inmates are hosed down, some would say unnecessarily (we won’t). Corman and Hill basically wrote the rules of the WiP genre with this one. Great stuff!