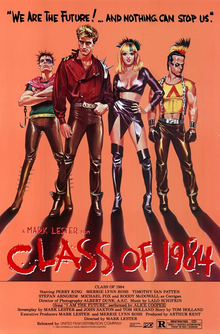 Orwell’s 1984 envisioned a sinister dystopia where everyone answered to a central, totalitarian authority. In Class of 1984, it’s lack of authority that’s the problem: a bunch of kids running roughshod over a highschool.

Mr Norris is the new music teacher at a problem school, rife not with sax and violins, but sex and violence. As he arrives on his first day, he meets fellow teacher Mr. Corrigan (McDowell) who packs heat to deal with the dangerous ruffians.

This film predated the ubiquity of metal detectors in North American schools.

It’s a fun, exploitation flick, shot in Toronto and featuring the debut appearance of one Michael J. Fox.

Quite shocking for its time, this one holds up really well today. Cut class, meet us behind the bleachers for a smoke and join us for a chat.